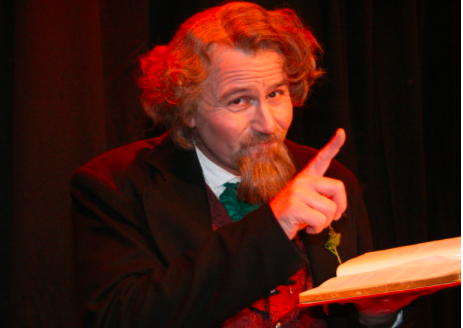 Mike Randall’s production of “A Christmas Carol” has been a huge success since its premiere in 2007. Giving performances across WNY the last ten holiday seasons, and premiering at MusicalFare Theatre, audiences and critics agreed that it was great to have Mr. Dickens back in WNY!
A lover of Buffalo history and presenter of one person shows, when Mike Randall discovered that Charles Dickens performed in Buffalo in 1868, he decided to recreate Mr. Dickens presentation of his most well known story.
Mike Randall is Senior Meteorologist and an an award-winning feature reporter at WKBW-TV. He was inducted into the Buffalo Broadcasters Hall of Fame in September 2017.
The Buffalo News wrote: “Mike Randall — a talented actor and magnetic stage presence….when Randall loses himself in one of those Dickensian bouts of rich description, he’s at the top of his game…”