The Greater East Aurora Chamber of Commerce is seeking to recruit an Associate Director.

Resumes for the position will be accepted through Thursday, January 10, 2020.

Resumes can be emailed to gdgrote@verizon.net or mailed to the Chamber office at 652 Main St., East Aurora, NY 14052.

The job description is posted below.

The role of the Associate Director – Membership and Events Specialist is to provide administrative and marketing support to the Executive Director of the Chamber of Commerce (Chamber).  A key function of this position is to act as the liaison between the local business community and the Chamber office, communicating member benefits to prospective members and assisting with current member inquiries.  Assisting the Executive Director with new business development opportunities and increasing revenue through new memberships and programs is a major function of this position.

NATURE OF THE POSITION:

Candidates must have at least two years’ experience as an administrative assistant or marketing coordinator and have strong organizational and communication skills.  Experience using a variety of software applications including Word, Access and Excel is required.  Must have own transportation for offsite events, activities and meetings.  This will be a salaried position and the candidate must be able to work flexible hours including occasional evenings and weekends and maintain a professional, positive public image. 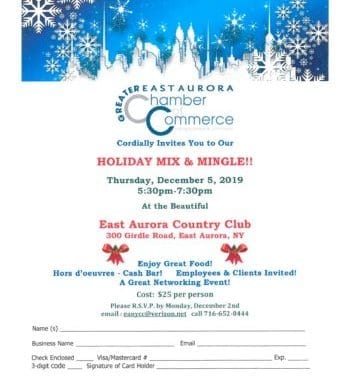 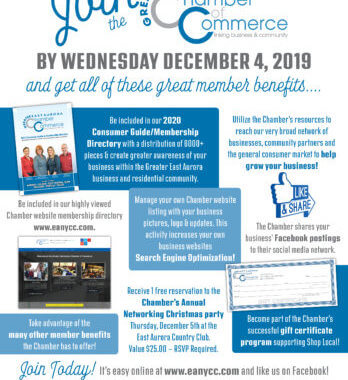 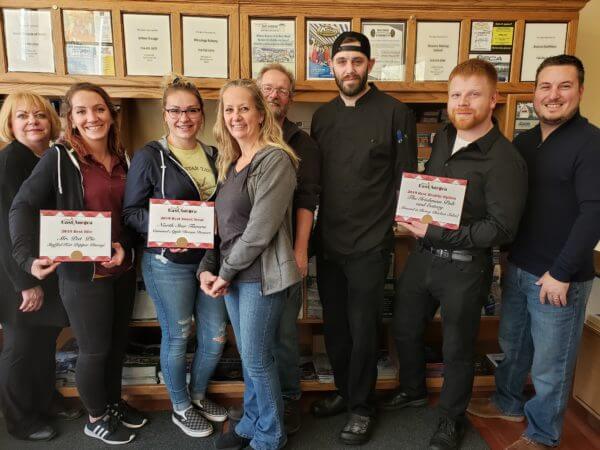 Conversation on the Future of Our Students in the Workplace

The Greater East Aurora Chamber of Commerce continues to find that one of the most serious, but least recognized concerns of our future is our students’ place in our workforce.

In talking to a majority of our member businesses, their most significant issue is finding properly prepared employees to fill vacant positions within their businesses.

To continue to bring this topic to the forefront, the Chamber will be holding a “Conversation on the Future of Our Students in the Workplace” ,Wednesday, November 6th, 5:30 to 7pm at the 42 North Brewing Company Conference Room, 25 Pine Street, East Aurora.

Topics will include but not be limited to:

Join us in working to develop a better understanding of the workforce needs of our business community and the development of partnerships in better preparing our students for the workplace.

To RSVP and for further information contact the Greater East Aurora Chamber of Commerce at 652-8444 or eanycc@verizon.net . Complimentary finger foods will be available.

Less visible but just as impactful work takes place on a daily basis through the activities that happen in the Chamber office.

The Chamber tracks over 6,000 contacts annually with individuals and businesses, within and outside of our community, through visitors who walk through our door, phone calls and email and Facebook contacts.

The Chamber responds to their requests regarding business referrals, tourism information, business assistance and calls for information on area business addresses and phone numbers.

As a Chamber we continue to share this important information so our members and community recognize that this is just one activity of value the Chamber accomplishes that helps add to the growth and vitality of the Greater East Aurora community and its businesses!

And, if the Chamber wasn’t doing it, who would?

The Greater East Aurora Chamber will be hosting monthly training seminars in partnership with Schroder Joseph & Associates regarding the New York State Department of Labor mandate that requires all employees to go through a sexual harassment prevention training each year.

The Chamber is providing these seminars to help local employers meet this obligation and will enable employers to keep current employees and new hires compliant with the mandate.

Each employee will receive a certificate upon satisfactory completion of the course.

Each session must have a minimum enrollment of 10 employees which can be comprised of multiple employers.

The Village of East Aurora, New York will again appear in a holiday themed movie.

Fred and Chris Olen Ray, Director and Producer respectively, are back in town to shoot their latest motion picture entitled “A Special Christmas Dinner”.

The father-son team are Hollywood based, and have shot several movies in Western NY and East Aurora including the popular Christmas movie “A Prince for Christmas” shot and released in 2015.

The movie crew will be shooting this Tuesday, March 26th mostly along Main Street and inside Vidler’s.

Background extras are needed and should be available all day (8am until 7pm). Those interested in appearing in this film are urged to send an e-mail to: westernnycasting@gmail.com

Main Street merchants are asked to help by displaying holiday decorations for that day.

The Buffalo Niagara Film Office would like to thank the Village of East Aurora, Mayor Peter Mercurio; Village Administrator, Cathie Thomas and the village Department of Public Works and Police Department for their assistance.

The Greater East Aurora Chamber of Commerce is working closely with the Buffalo Niagara Film Office and the movie team to coordinate the shoot.

Tim Clark, Buffalo Niagara Film Commissioner stated that, “ My office appreciates the leadership and work of the Greater East Aurora Chamber of Commerce in coordinating these movie shoots in the village. It takes precision planning to pull it all off and the Chamber is a valuable resource and important partner for us and the Western New York film industry.”

Chamber Executive Director, Gary Grote says, “The Chamber recognizes this as a worthwhile contribution to the Greater East Aurora community. There is tremendous value to filming here by promoting the East Aurora community throughout the country while additionally the film crew purchases various supplies, equipment and food services from local vendors and employs local technicians to round out their film crew.”

The Chamber continues to be active in efforts such as this that help create a vibrancy which attracts shoppers and visitors to support our local business community.

The Greater East Aurora Chamber of Commerce is presenting a panel of 6 local employers in various industries to talk about career opportunities in their respective fields.

The event is free and will be held Wednesday, January 23rd, 7 – 8:30pm at Absolut Care of Aurora Park, 292 Main St., East Aurora. This presentation is open to the public – parents, students, educators, and businesses. Enter the building through the Rehab facility toward the rear of the building.

Light refreshments will be served.

Panelists will discuss exciting opportunities in the skilled trades, auto service & repair, welding, health care and manufacturing fields and the skills needed in entering the workforce in general.

Prior registration is not required. For further information contact the GEACC @ 652-8444. 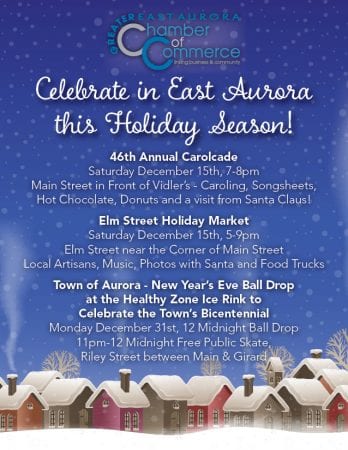